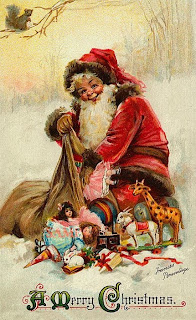 When I was a child, I used to love to listen to my mother's four album Reader's Digest "Joyous Noel" song collection.  It was special to me not only because I was only allowed to play it in the month of December - under threat of death from my, shall we say, slightly less-than-joyously-spirited big brothers - but because it had a quality of songs and singing that I rarely heard otherwise. Suave voices of the 1940's and 50's, mixed in with 30's big bands and soulful singers of the 60's. When you're in the middle of the Big Hair 80's, hearing someone sing with passion and soul, accompanied by real instruments rather than electronically generated sounds, is like an ice cream sundae for the ears.

For most of my adult life, I've been parted from my beloved Reader's Digest collection and I recently found myself trawling high and low in what is clearly the 21st century's version of a dusty, old attic - the Internet - seeking tunes that evoke the same sense of childlike wonder and awe for the quality of the sound and the innocence of the message being sung.

I have stumbled across a number of beauties and I thought it would be appropriate at this sharing, caring time of year to give a little back to the Internet, and you, in the form of my personal Top 10 list of perhaps forgotten - but always loved - Christmas songs of yesteryear.

Here's hoping you and your loved ones will enjoy sharing them, each and every one!


Always nice to start with someone who's been to Muskoka!  Glenn Miller and his Orchestra played at the Kee to Bala, the dance hall that's been a Canadian music tradition since 1942.


#7 Rudolph the Red Nosed Reindeer by The Temptations (1968)

There are so many versions of this classic, but Ella and Louis have got it pegged.

Now, let's not let his mafia ties get in the way of enjoying some Fabulous crooning...

#3 Have Yourself a Merry Little Christmas by Judy Garland (1944)

Will have you wishing for some shiny red shoes from Santa too.

Ah, the wonder and the innocence of it all.  Wouldn’t catch Miley Cyrus or Robin Thicke twerking this one, would ya?

#1 I want a Hippopotamus for Christmas by Gayla Peevey (1953)

Ah, you just can't beat this little gem.  You'll catch me humming it all around the house for the month of december, AND January! (While being chased by said less-than-joyously-spirited big brothers, of course ;)

What are your favourite Christmas songs from yesteryear?