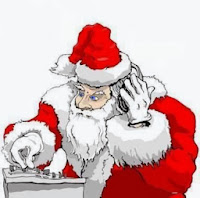 After the rest of the family saw my lovingly prepared list of Top 10 Christmas Songs of Yesteryear, I was bombarded with a number of rather salubrious requests for changes to the list. (Okay, salubrious may be pushing it.  We are in the decade of epic fails and twerking, after all.)

Rather than sacrifice the sentiment and originality of that inaugural list, we decided to compromise on the creation of a brand new list.  So here we go, our family's Top 10 never forgotten - and always loved - Christmas songs of every year.

After all, it's Christmastime, pretty baby...


Elvis once said, "Too much TV hurts movies".  Don't hear that much now-a-days, do ya?  Still, ya can't enjoy the true Christmas spirit without a bit of Elvis, now can ya?

Sure, it's a favourite festive song, but the lilt will always suggest Hotel California to us.

A nod to our friends and family over in the UK, this is just a super sweet version of that family favourite, "The Little Drummer Boy".

with the Harlem Community choir.  This song was released in conjunction with 12 billboards across major cities around the world that read, "WAR IS OVER! If You Want It – Happy Christmas from John & Yoko".  Certainly would have turned my head!

Interesting fact here is that this video is apparently the last appearance of George Michael without his beard - he's had one ever since!

#5 Santa Claus Is Coming to Town by Bruce Springsteen (1975)

Ahhh, a favourite staple for us and for Bruce - he breaks it out at most of his pre-Christmas concerts even now.  Enjoy!

It's hard to believe that McCartney critics like to refer to this song as "one of McCartney's poorest compositions".  But then again, they are comparing it to the likes of "Lucy in the Sky with Diamonds", "All You Need is Love" and "Hey Jude".  Fair enough, really.

Another favourite of ours, this song is apparently number 1 on the royalties charts each year, grossing $840,000 every Christmas.  Must be a favourite for a couple of other people and families out there...

This song's roots were in a BBC news report on the devastating famine in Ethiopia.  It was recorded, mixed and released over just a few days in 1984 and has gone on to be a festive favourite every year since - for our family and yours, I bet.

Ah, we're sure you've heard this song before, but did you know that the Pogues were considered a Celtic punk band?  Yup, and the song was originally planned as a duet between the lead singer and the female bassist, but she said au revoir to the band before it was finished.  Lucky for Kirsty MacColl.  Or should that be lucky for the Pogues?


What are your family's favourite Christmas songs year after year?